The 1918-19 influenza pandemic, often called the Spanish flu, was a global health crisis on an almost inconceivable scale. The virus – which came in four deadly waves after the First World War – was rampant and far-reaching, infecting at least one third of the world’s population.

We don’t know how many people it killed worldwide: at least 50 million and possibly as many as 100 million. We don’t know exactly how many it killed in Australia, either: somewhere between 15,000 and 17,000 people. We do know that the Spanish flu didn’t originate in Spain.

The story of how it came to be known as the Spanish flu is a story of censorship and miscommunication. There are a few theories on the origins of the virus, but many medical historians believe the epidemic – that later became a pandemic – began during the First World War among soldiers in cramped, unhygienic trenches and training camps on the Western Front in early 1918.

Warring nations suppressed information about the rapidly spreading virus so as not to affect the morale of soldiers and citizens back home.

Spain, however, was neutral in World War I and Spanish journalists reported freely on the deadly flu strain as it ripped through the Madrid population and struck King Alfonso XIII. This led to a widespread misconception that the flu strain originated, and was especially prevalent, in Spain.

Rumour and misinformation spread widely during the Spanish flu era, just as during COVID-19, but the speed and means of communication are now vastly different. 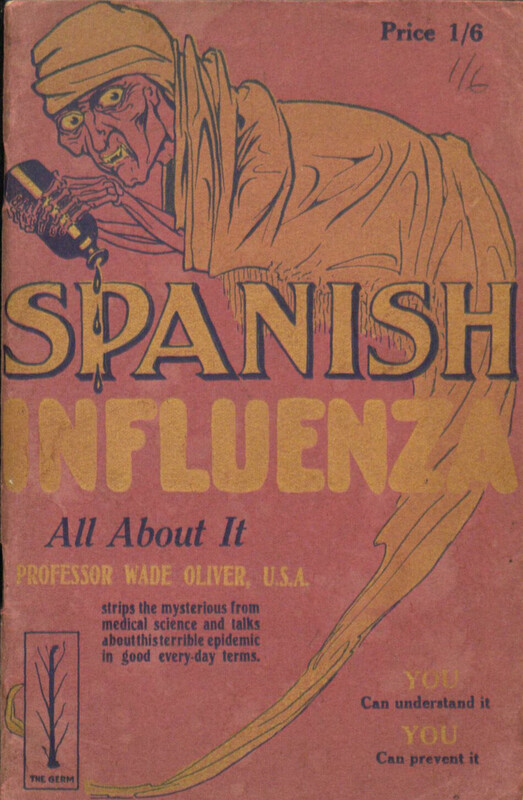 Australia received official warnings of the deadly virus from neighbouring nations via telegraph months in advance of the first confirmed Australian infection. Though telephones were in use in Australia at the time, the telegraph was the key technology used to communicate the imminent threat of the virus and to manage its spread interstate once it reached our shores.

Telegraph lines in Australia had been laid in the late 1850s, with the first line erected between Melbourne and Williamstown in 1854. The building of the Overland Telegraph line, spanning Central Australia to Darwin, was key to connecting Australia to the rest of the world. For most people in Australia, the preferred means of communicating was via telegrams, the number of which had leapt from eight million per year in 1901 to almost 18 million (17,934, 998) in 1919-20. 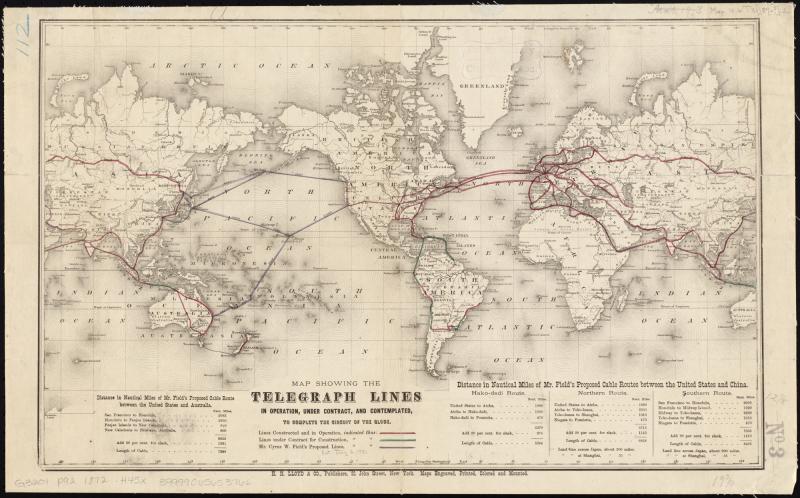 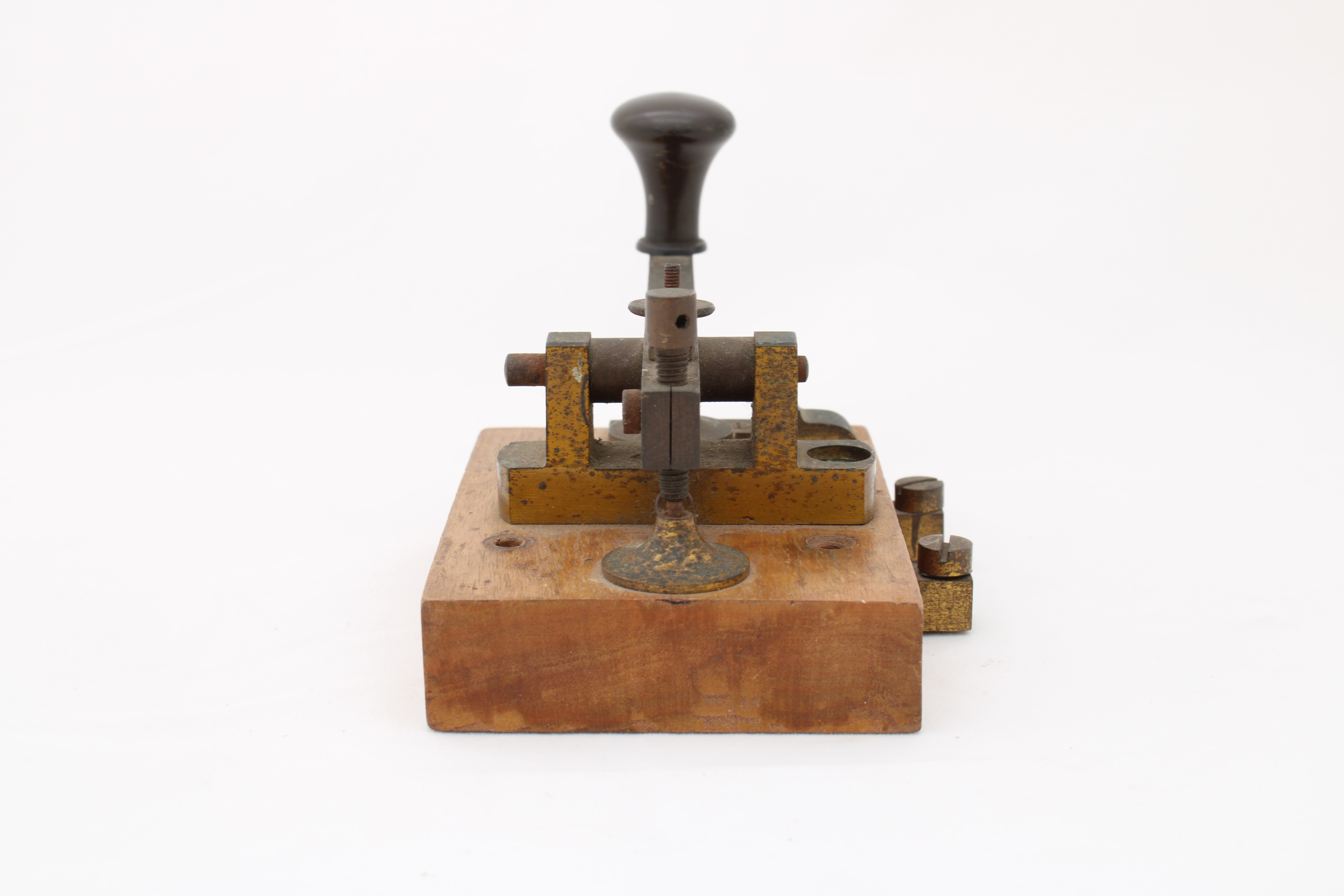 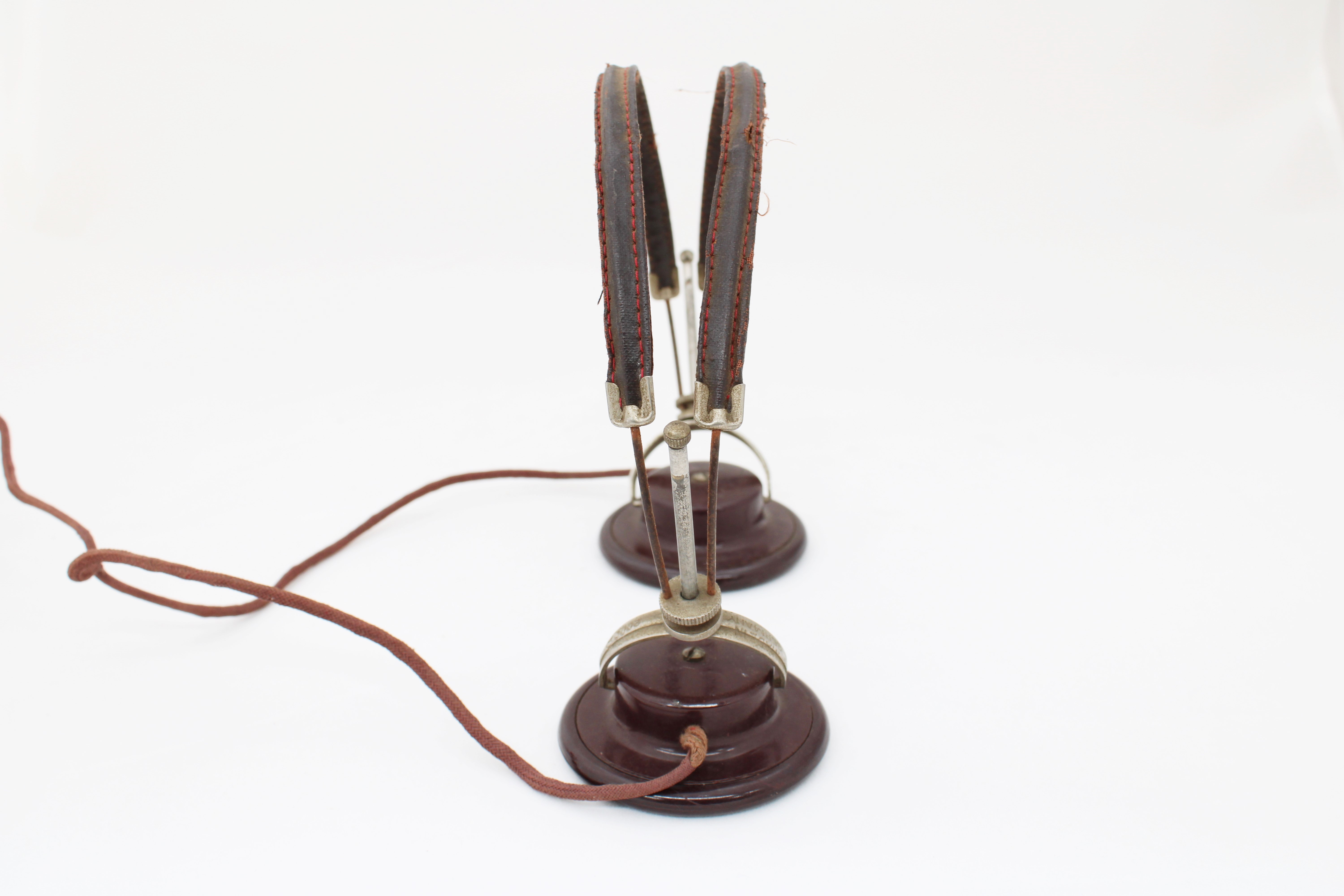 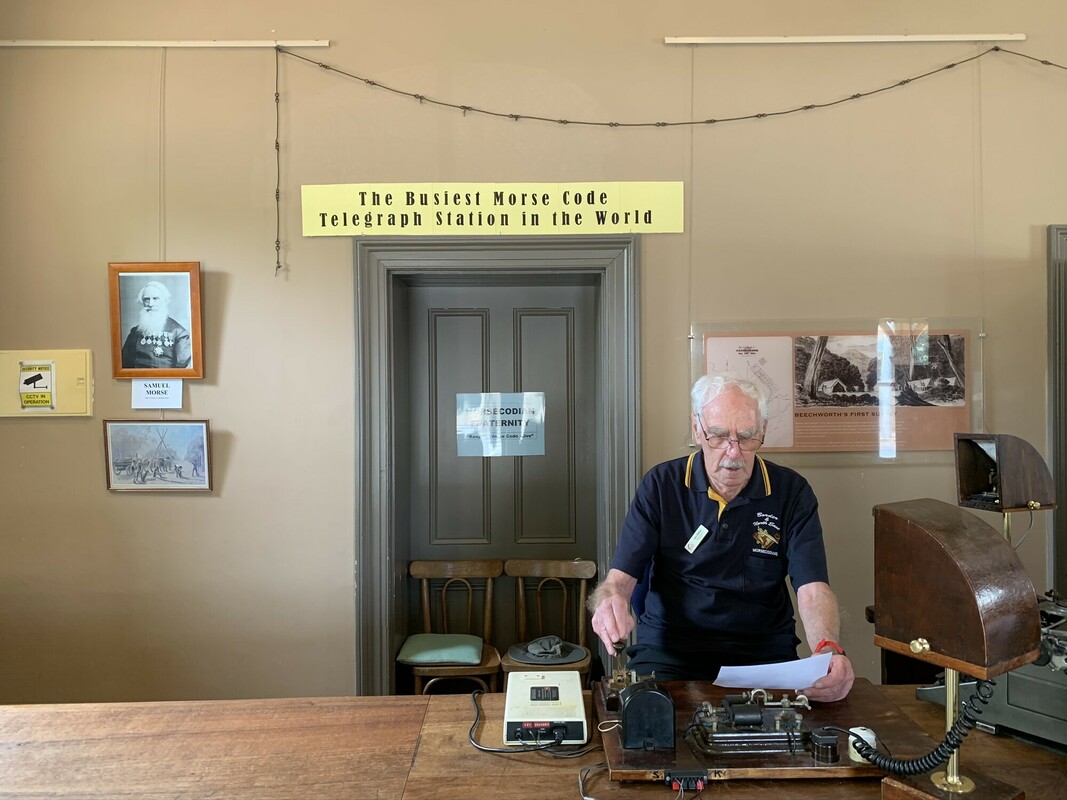 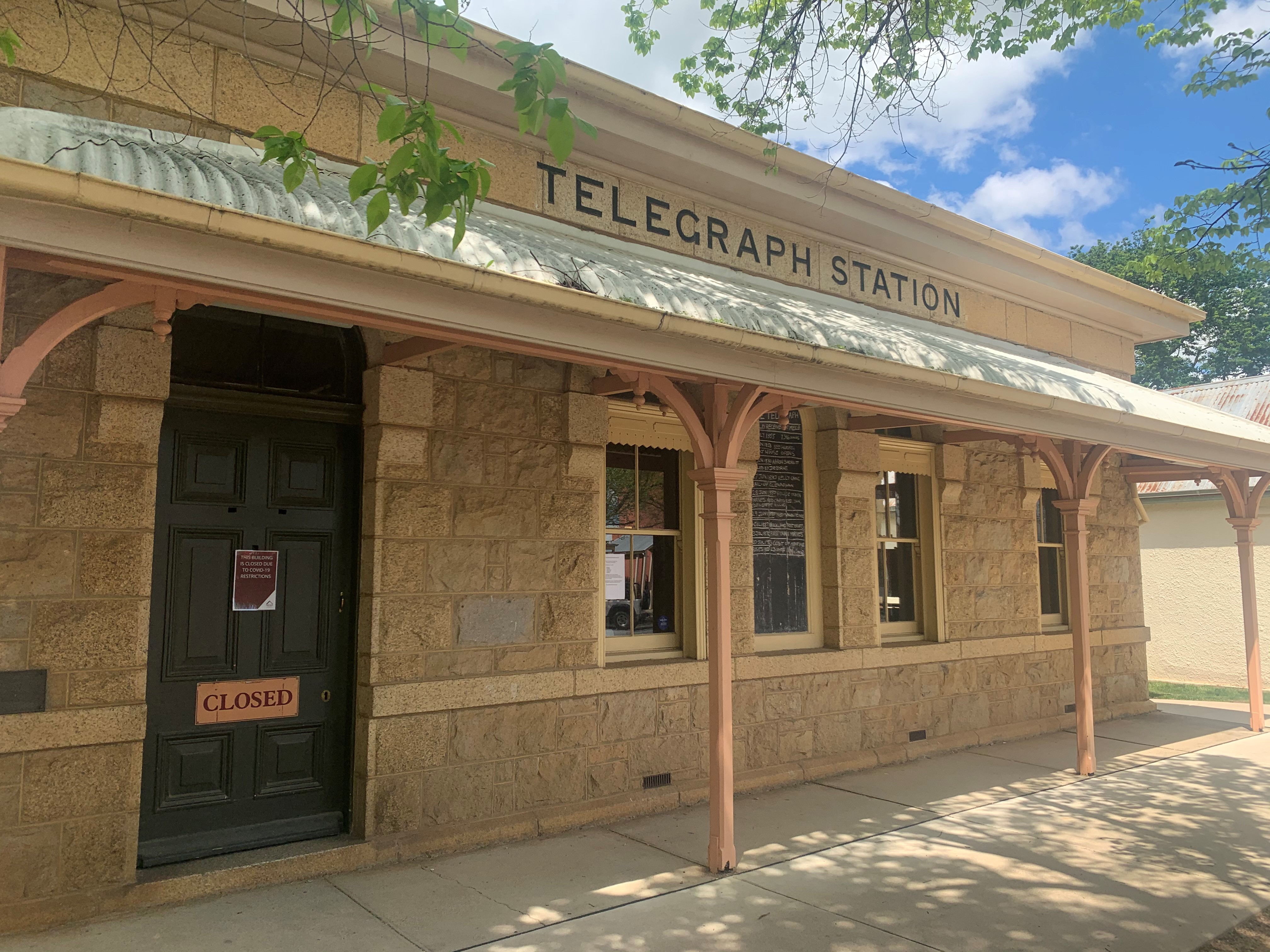 ‘In View of Terrible Experience…’

In October 1918, the federal government received cablegrams from South Africa and from the director-general of health in New Zealand, warning Australia of the imminent threat of the virus. The federal government reacted by introducing maritime quarantine controls on 18 October, with passengers on all vessels reaching Australia’s ports undergoing rigorous health checks. Soldiers returning from war were forced to quarantine.

The federal government hurried, too, to organise agreements between the states on how to manage the pandemic. In November, an urgent meeting was held in Melbourne and the states agreed to disclose to the federal director of quarantine,  Dr John Howard Lidgett Cumpston, if any case of pneumonic influenza was found in their population. They also agreed that states declared infected would keep their borders open to neighbouring infected states. 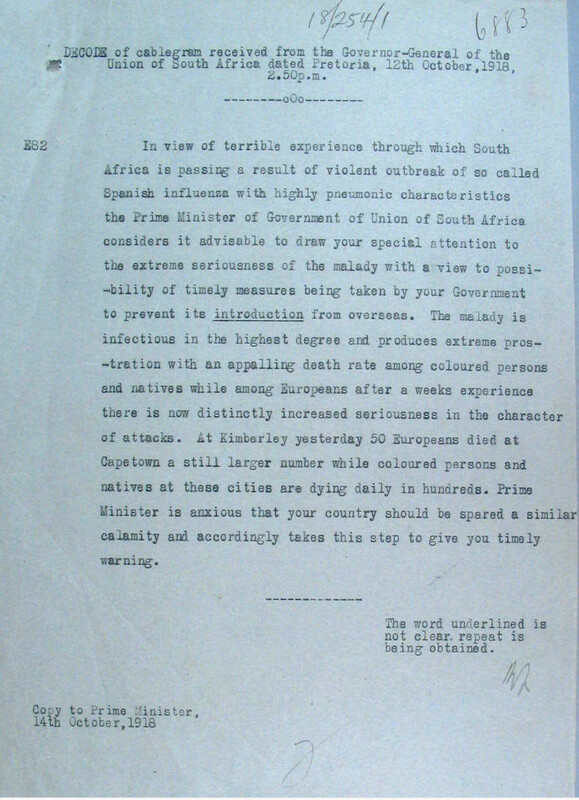 The virus arrived in Melbourne in early January 1919. One of the first people infected was a 15-year-old Coburg boy who worked at wool brokers, W Haughton and Co.

By late January, the virus had crossed the border to New South Wales. A soldier travelling north was believed to have caught the virus from an infected traveller in his train carriage. By the first week of February, case numbers in Melbourne had exploded to nearly 1500.

The federal Australian Government was only 17 years old and the arrival of the Spanish flu sent the newly federated states into chaos. Despite the November 1918 agreement, health officials in Victoria proved reluctant to disclose the suspected presence of the virus in the state’s population. New South Wales broke the agreement, closing its borders with Victoria. In scenes echoed during COVID-19, politicians squabbled with their interstate counterparts through the media, ships were turned away at ports and passengers were left stranded at borders.

By the end of January, New South Wales and Victoria had introduced official influenza emergency regulations, followed by other states. Theatres, cinemas, hotels, concert halls and billiard saloons were closed. Horse races were called off across the country. 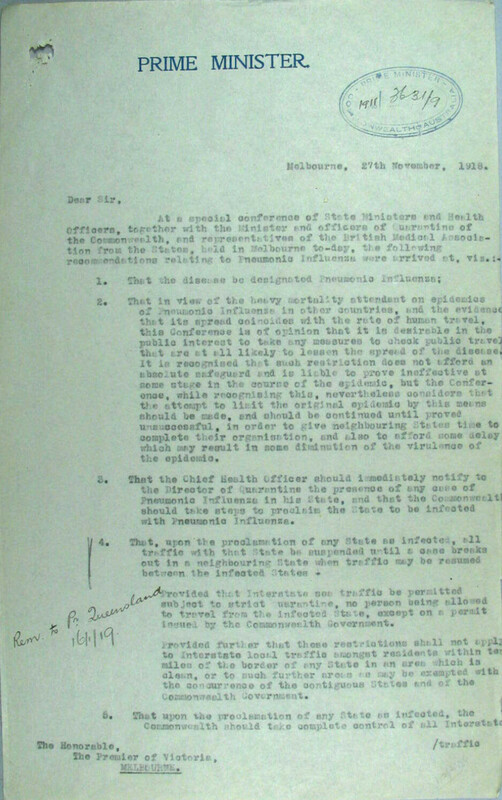 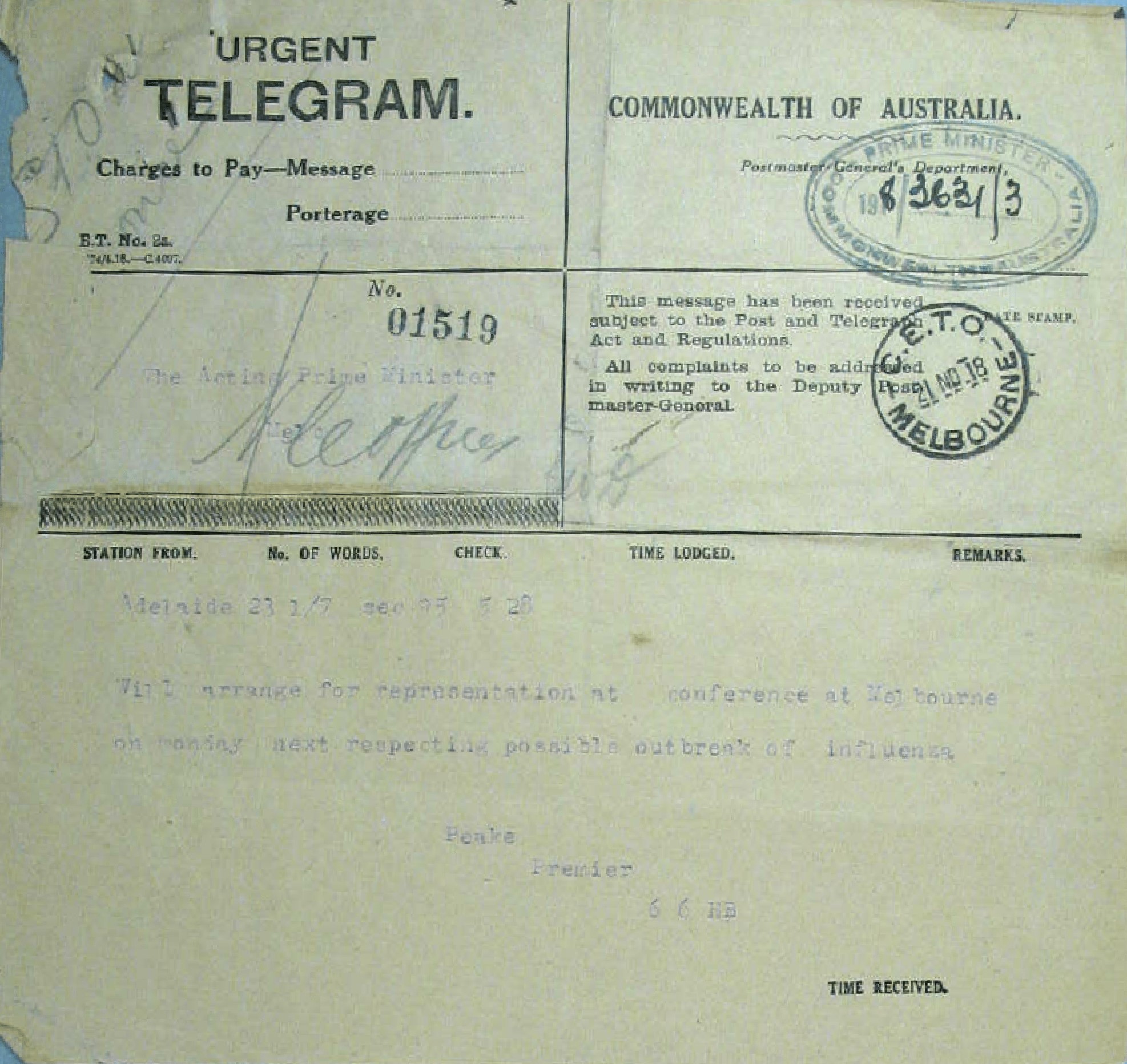 When the pandemic struck, Australia’s airmail service was still in its infancy. The first service had been introduced only a few years earlier – in 1914. Trains and motor vehicles were replacing horse-drawn postal delivery services for domestic mail. By the late 1920s, motor vehicles were firmly established as the primary means of postal transport as they were able to travel long distances with heavy mail loads.

Most mail was sent via train and truck, often on treacherous roads, and delivery times were slow. On the New South Wales north coast in 1920 it took four to five days for a letter to come from Sydney, and the same again to deliver a reply.

Post and print communications were key to disseminating news and information to households during the Spanish flu. But interstate border closures created havoc with the mail services and there were major outbreaks of the flu within the Postmaster-General’s Department. The fear of potential contamination led to the suggestion that mailbags be disinfected. 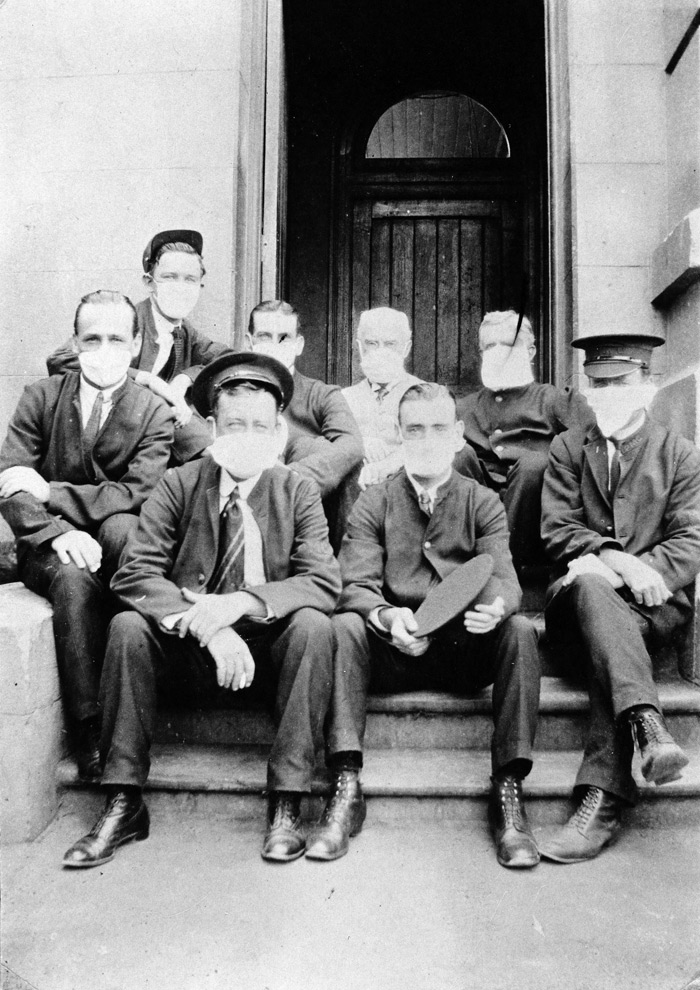 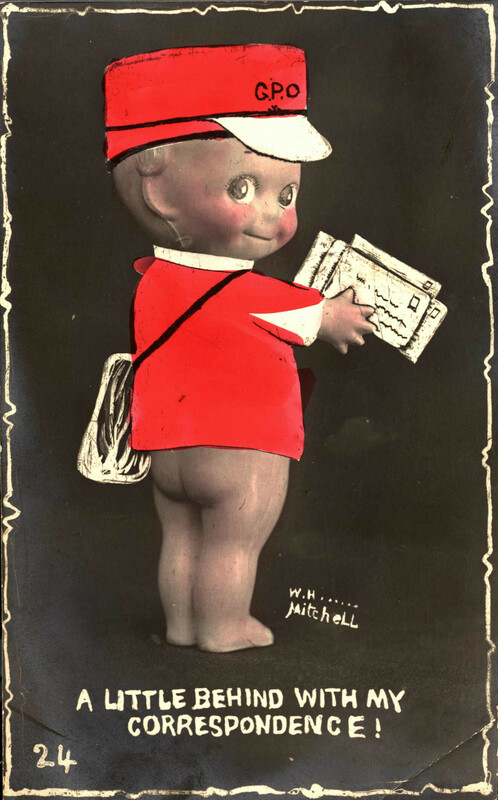 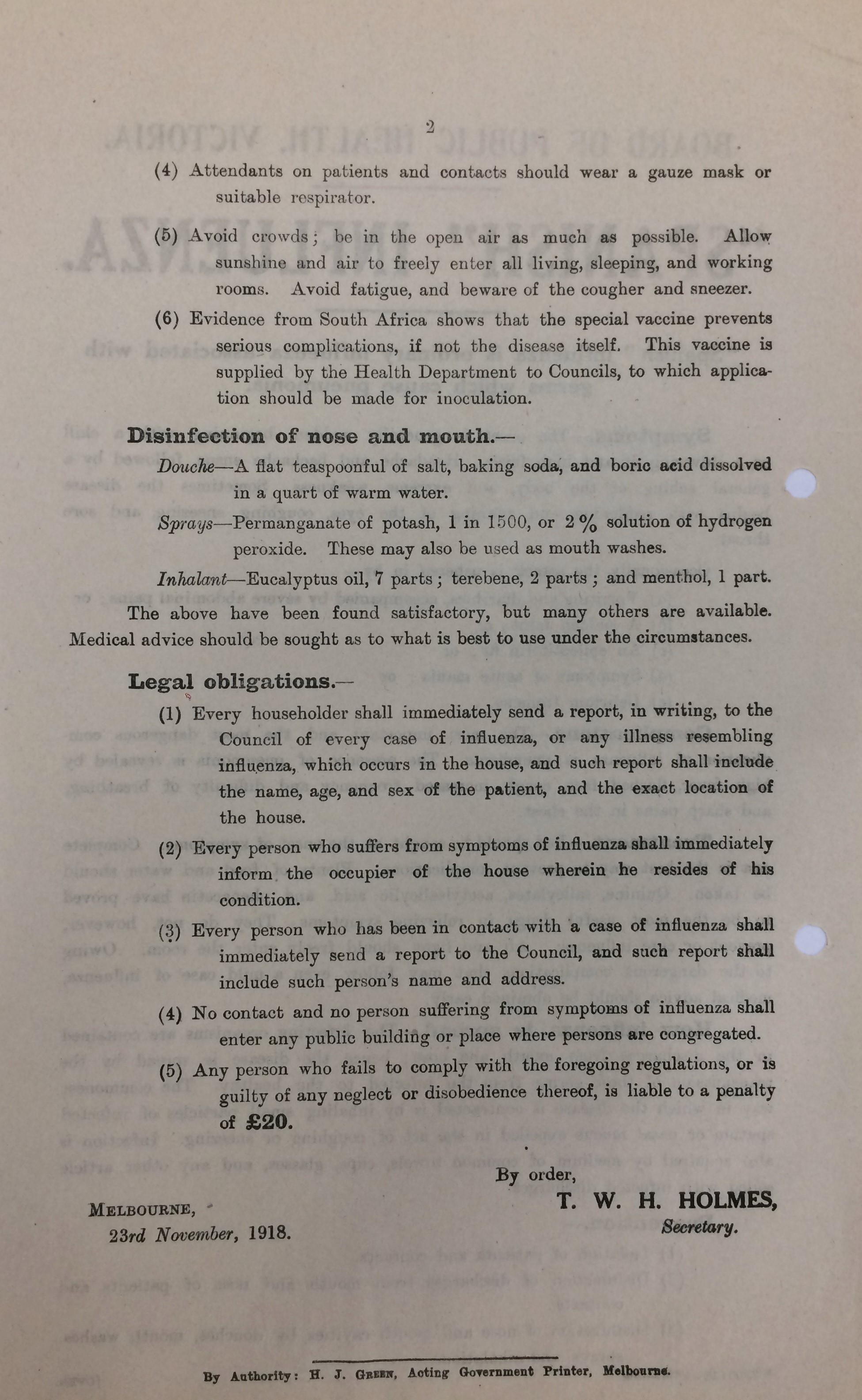 Most households didn’t have telephones so SOS signs were distributed for people to display in their windows if they were sick and needed assistance. In South Melbourne, residents who needed help were advised to hang a sheet from their front window. 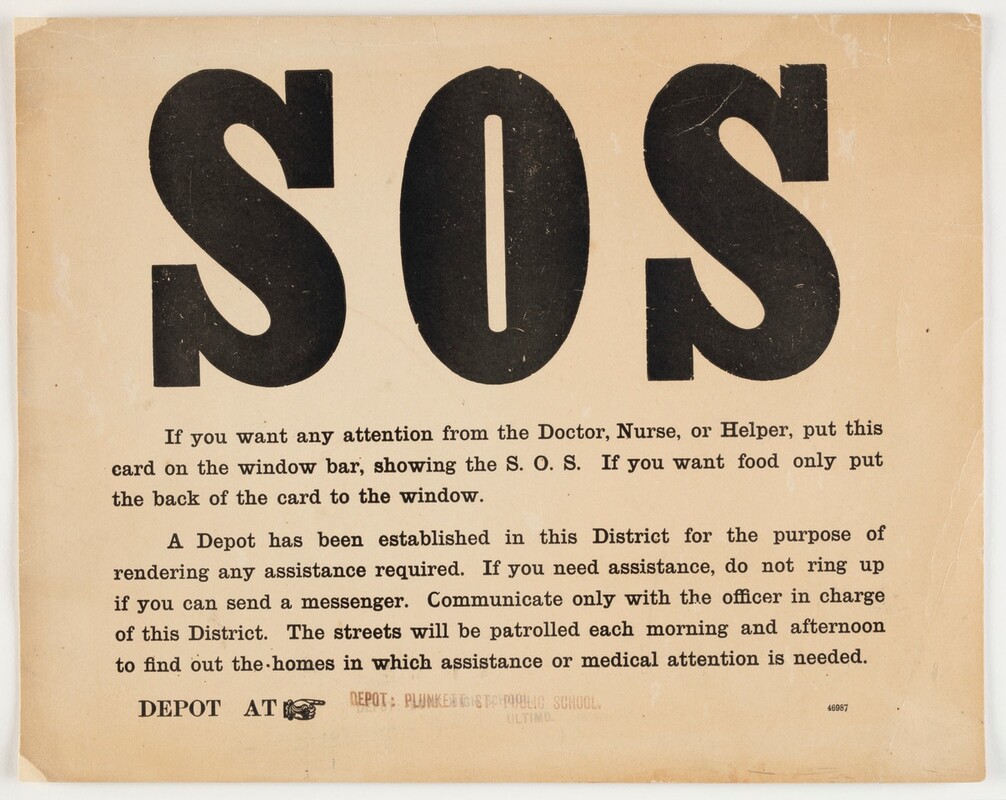 Our postal service has changed dramatically in the years since the Spanish flu and it’s changed dramatically again in 2020. With retail closures and restrictions, there’s been a huge increase in online shopping. Our postal service was already seeing an increase in the number of parcels distributed through the service and a decrease in the number of letters, but the pandemic has caused an enormous parcel surge, especially with food, liquor and home and garden purchases.

In May, the Australian Postal Corporation Act 1989 was temporarily amended to adapt to the new demands on Australia Post during the pandemic. These changes introduced new definitions of ‘priority mail’ and allowed Australia Post to reduce the frequency of its letter delivery services in metropolitan areas. A report from the senate inquiry into the amended act suggested the profitable ‘pivot to parcels’ might be long-lasting; prioritising commerce over communication. 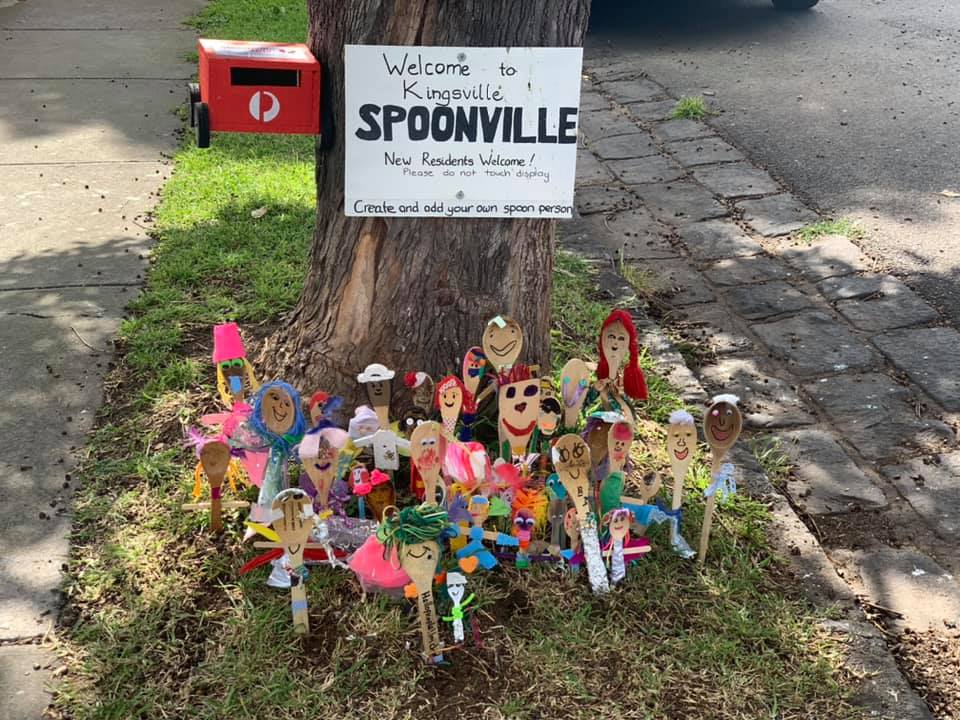 Newspapers were the major news source, and a booming form of media, in Australia in the early 20th Century. By 1924 there were 26 metropolitan dailies in circulation across the country.

There are many poignant parallels with the COVID-19 era in media coverage, especially cartoons, from the time. Many people felt bored, trapped and oppressed by government restrictions. Others felt isolated and anxious about their health and finances. 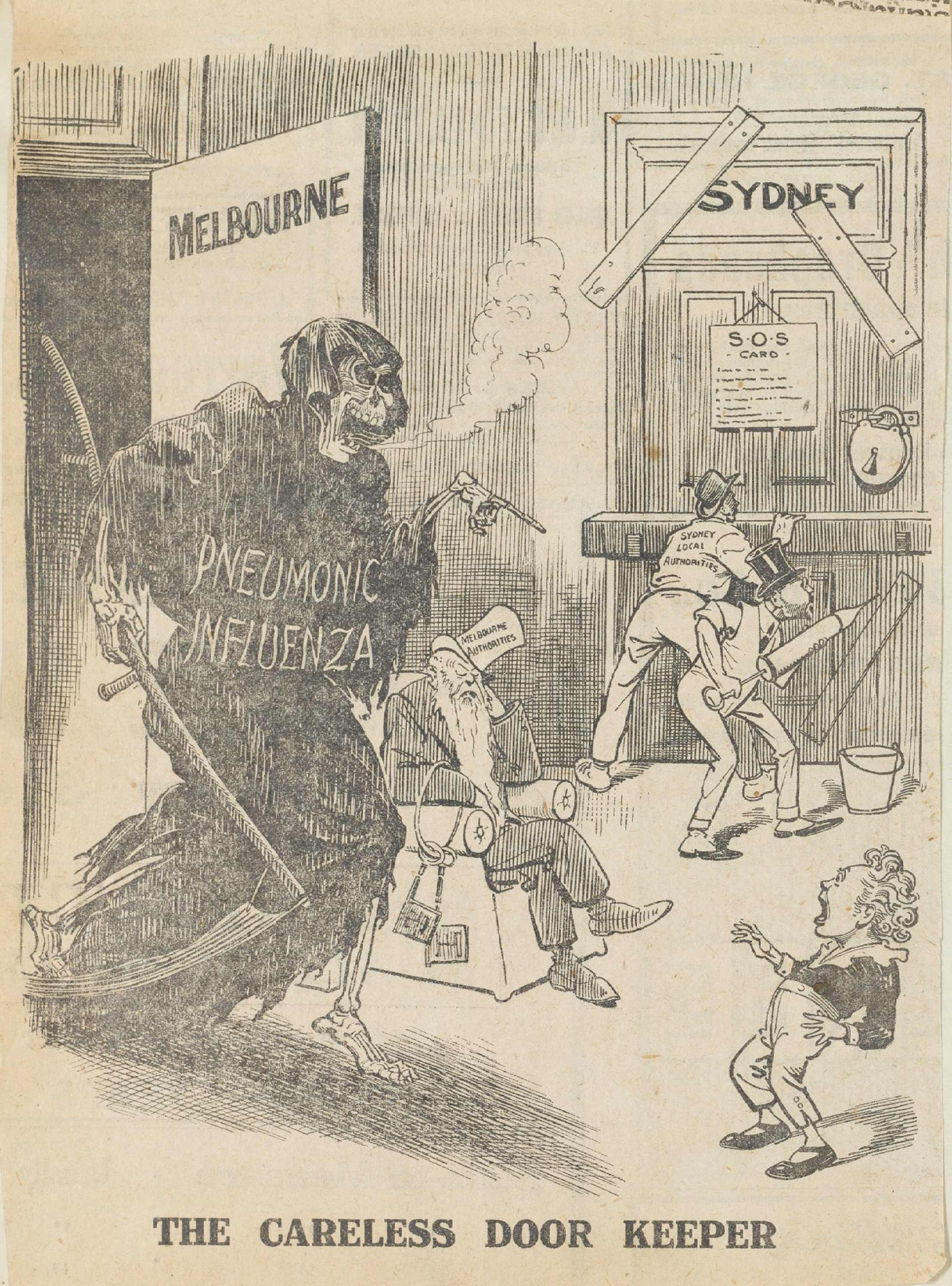 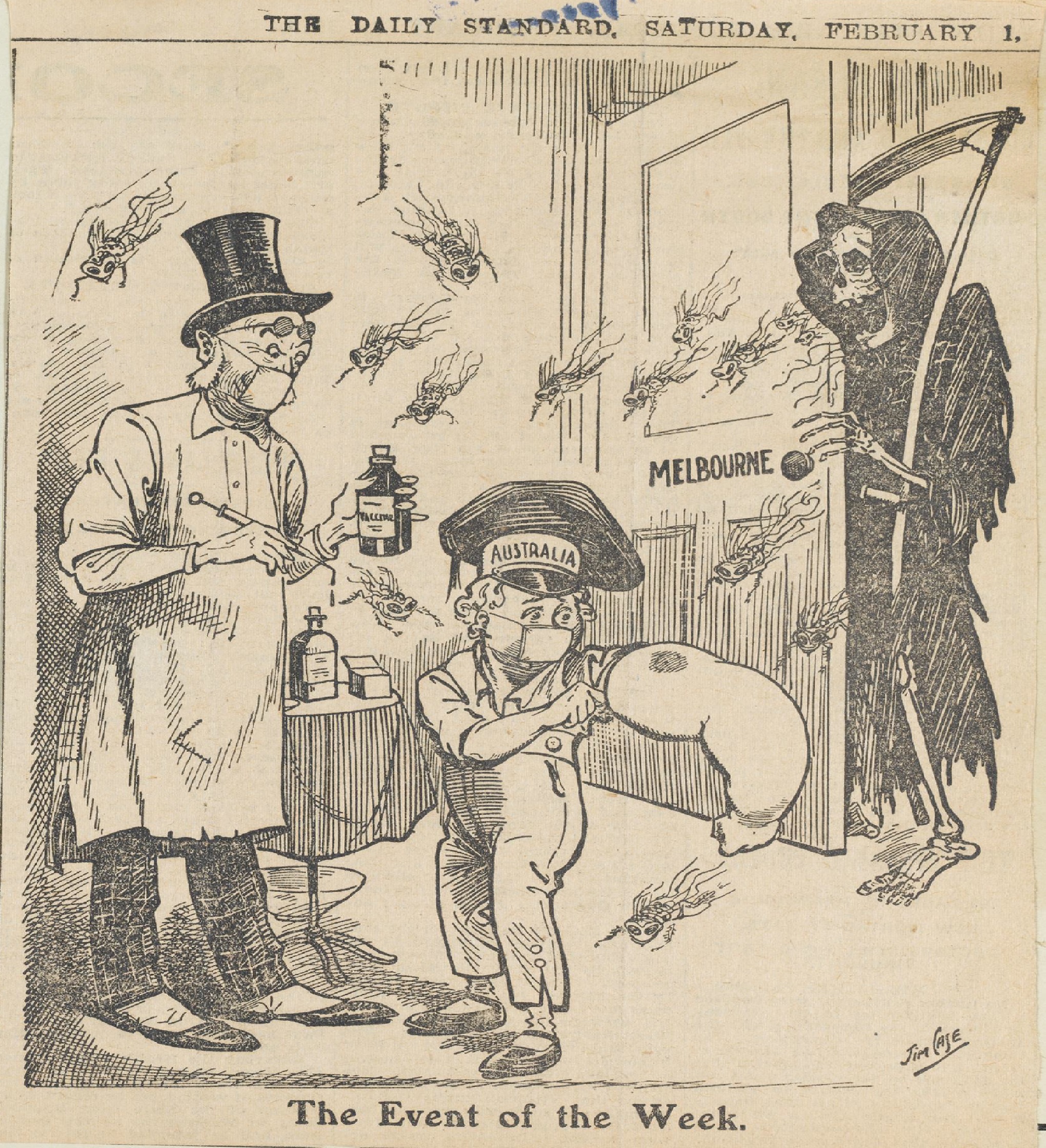 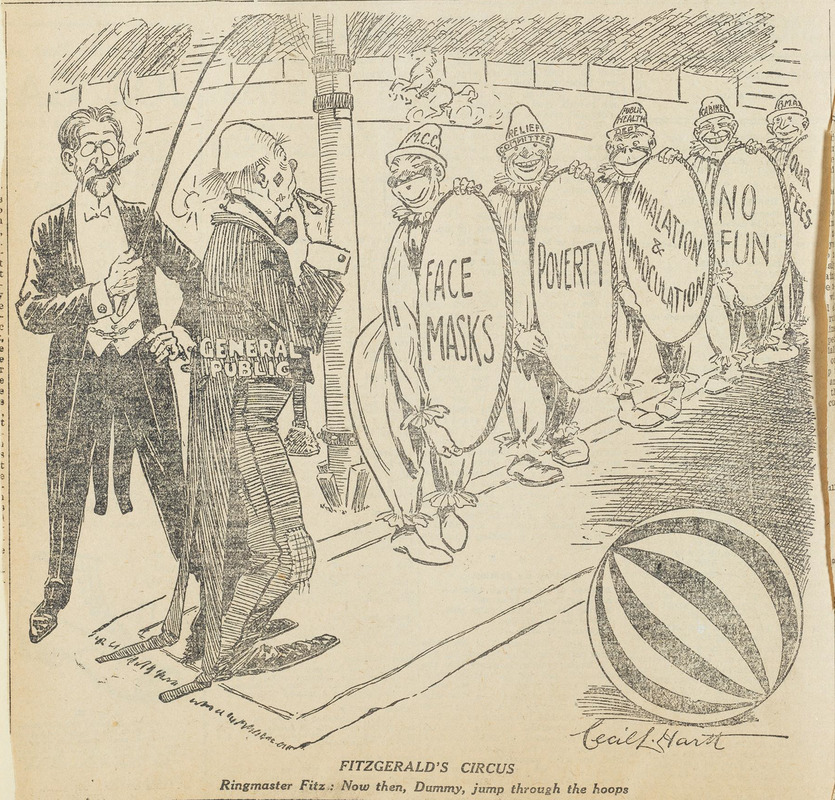 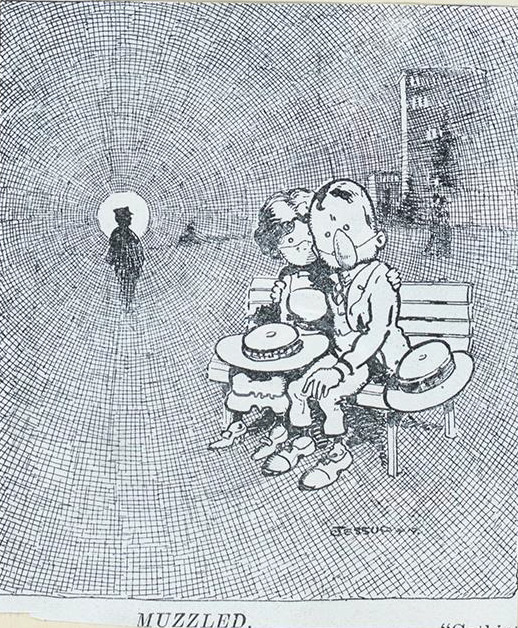 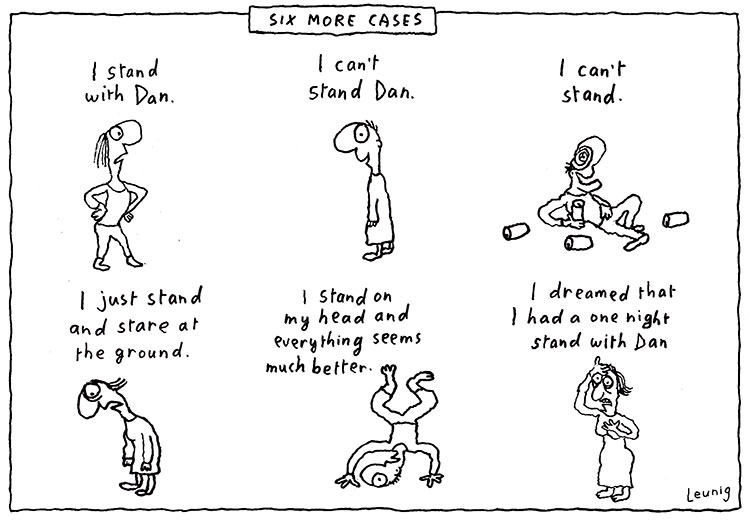 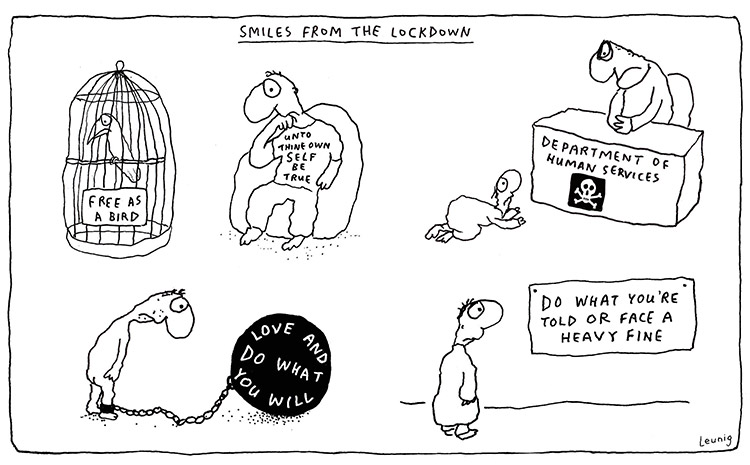 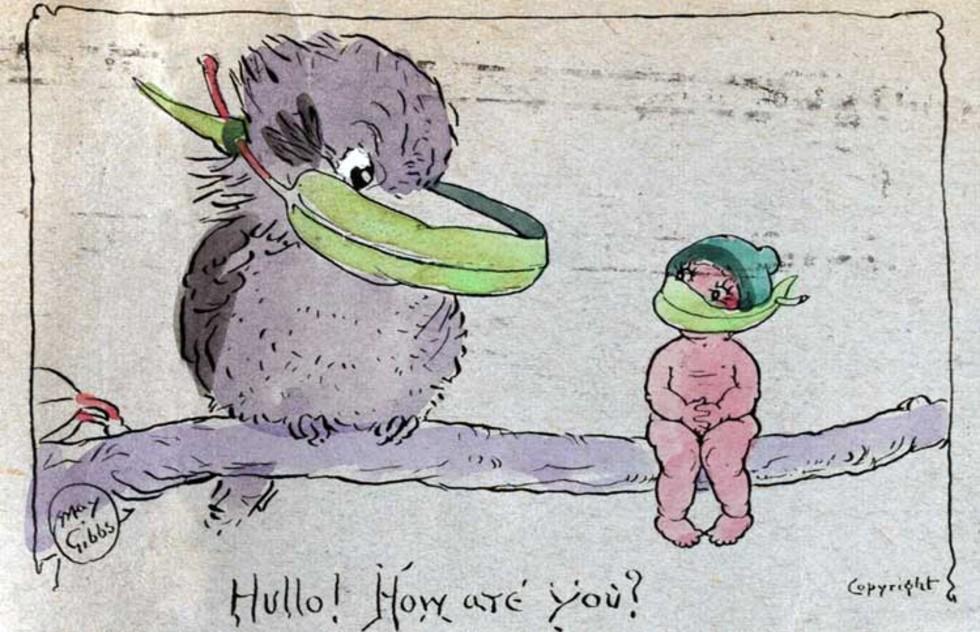 Face masks were a hot-button issue then, as now. In 1919, masks were made mandatory in Brisbane, in parts of Tasmania and right across New South Wales. In Melbourne, masks were mandatory during indoor church services only – with exemptions for priests and ministers. Many people refused to wear masks, risking fines for non-compliance.

In the COVID-19 era, masks have been mandatory so far only in Victoria. Compliance has been widespread. Mask-refusers have been a noisy but small – and sometimes ridiculed – minority. 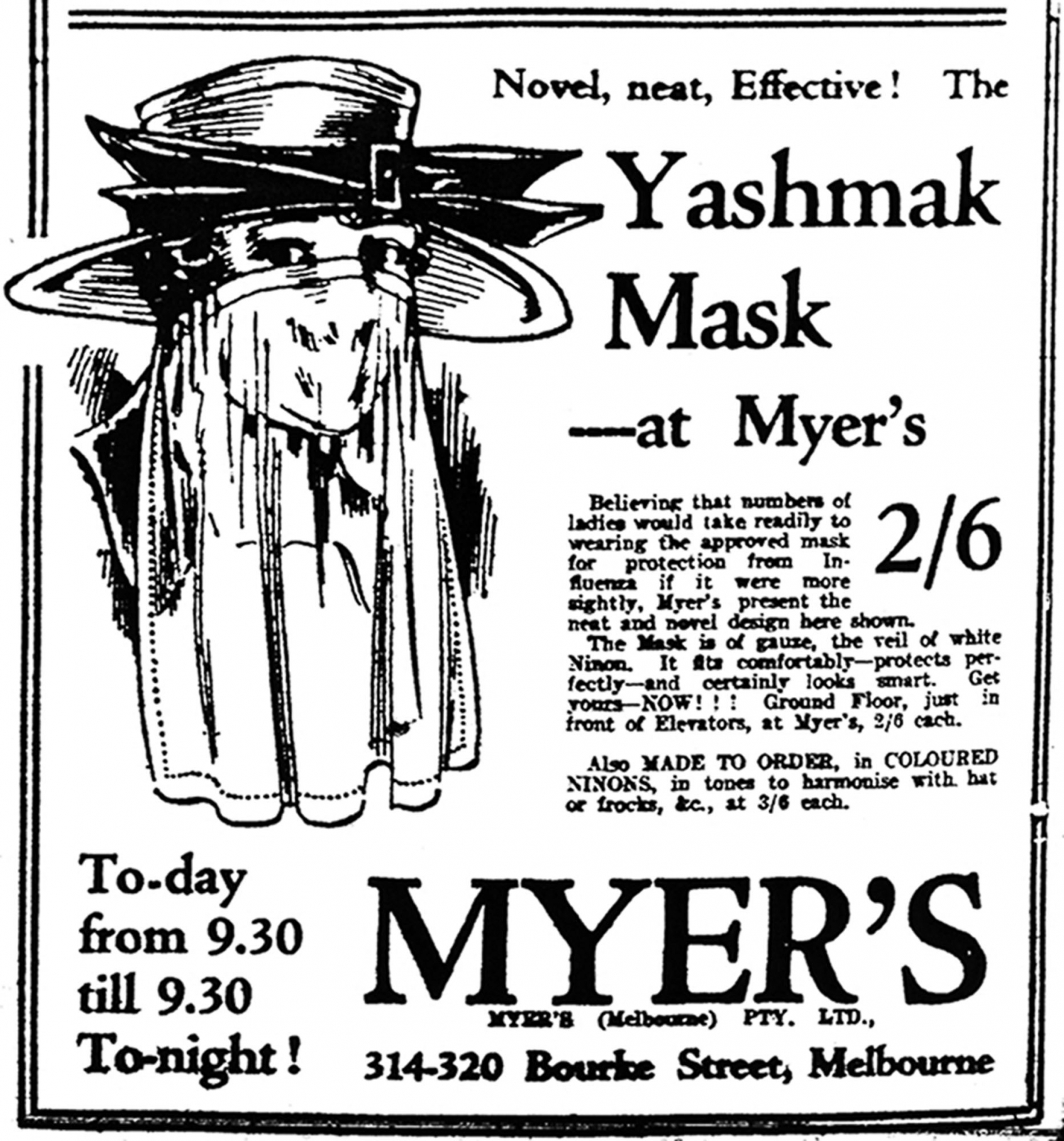 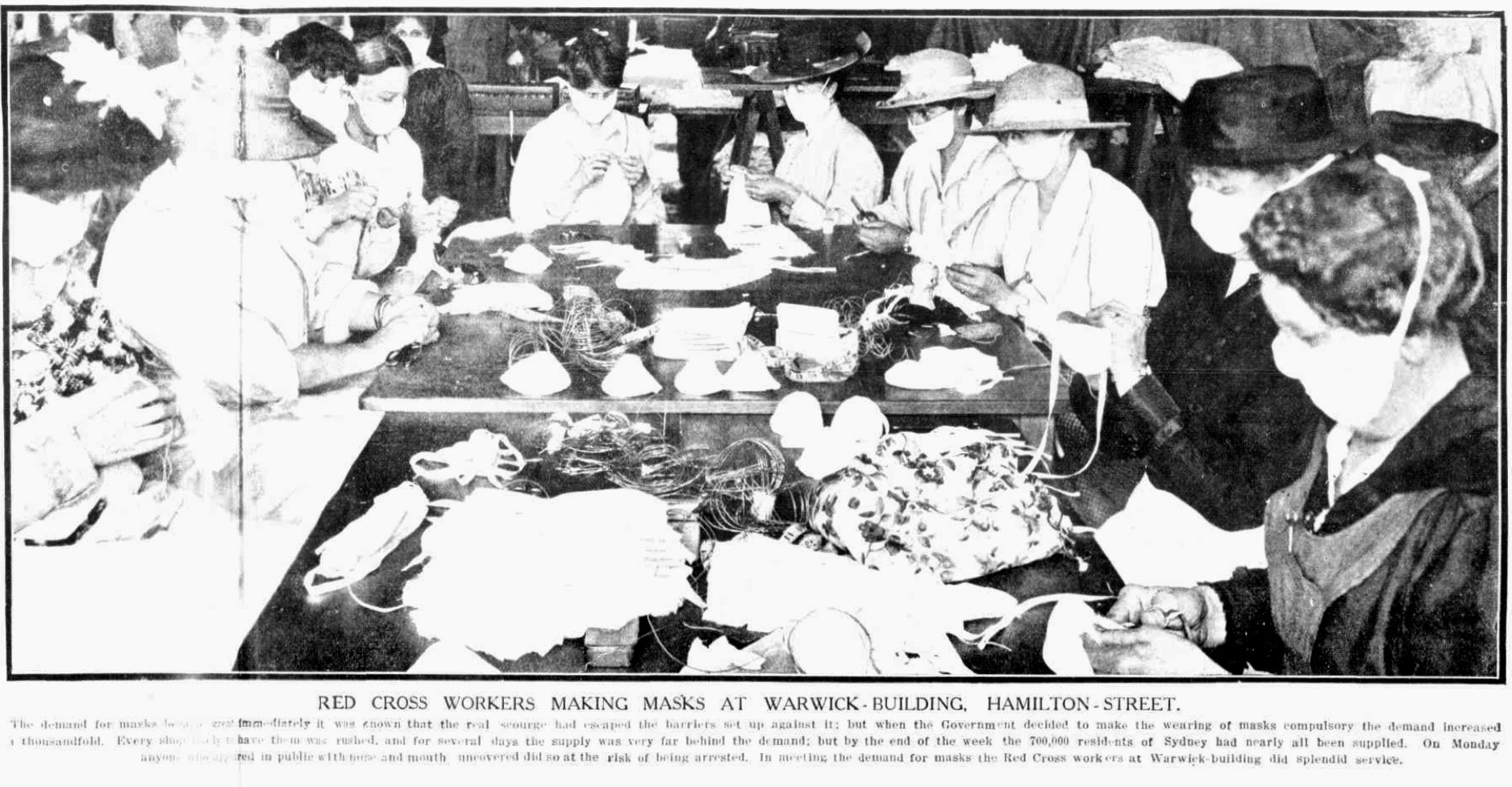 Government public health information is much more sophisticated and targeted today than it was during the Spanish flu – and it needs to be. Our media has become fragmented, our demography has shifted and there’s a greater understanding of the communication needs of people who live with disabilities.

Today, public health messages are spread across many types of media – including print, radio, TV, text message, social media and tracing apps – in many different languages. Auslan interpreters have been present at daily livestreamed government press briefings across the country and some of these interpreters have become local mini-celebrities.

Still, the dissemination of public health information has not always met the mark. Suburbs with large migrant populations were overrepresented in new infections in the second wave of the virus in Melbourne, prompting criticism of the Victorian Government’s messaging in languages other than English. 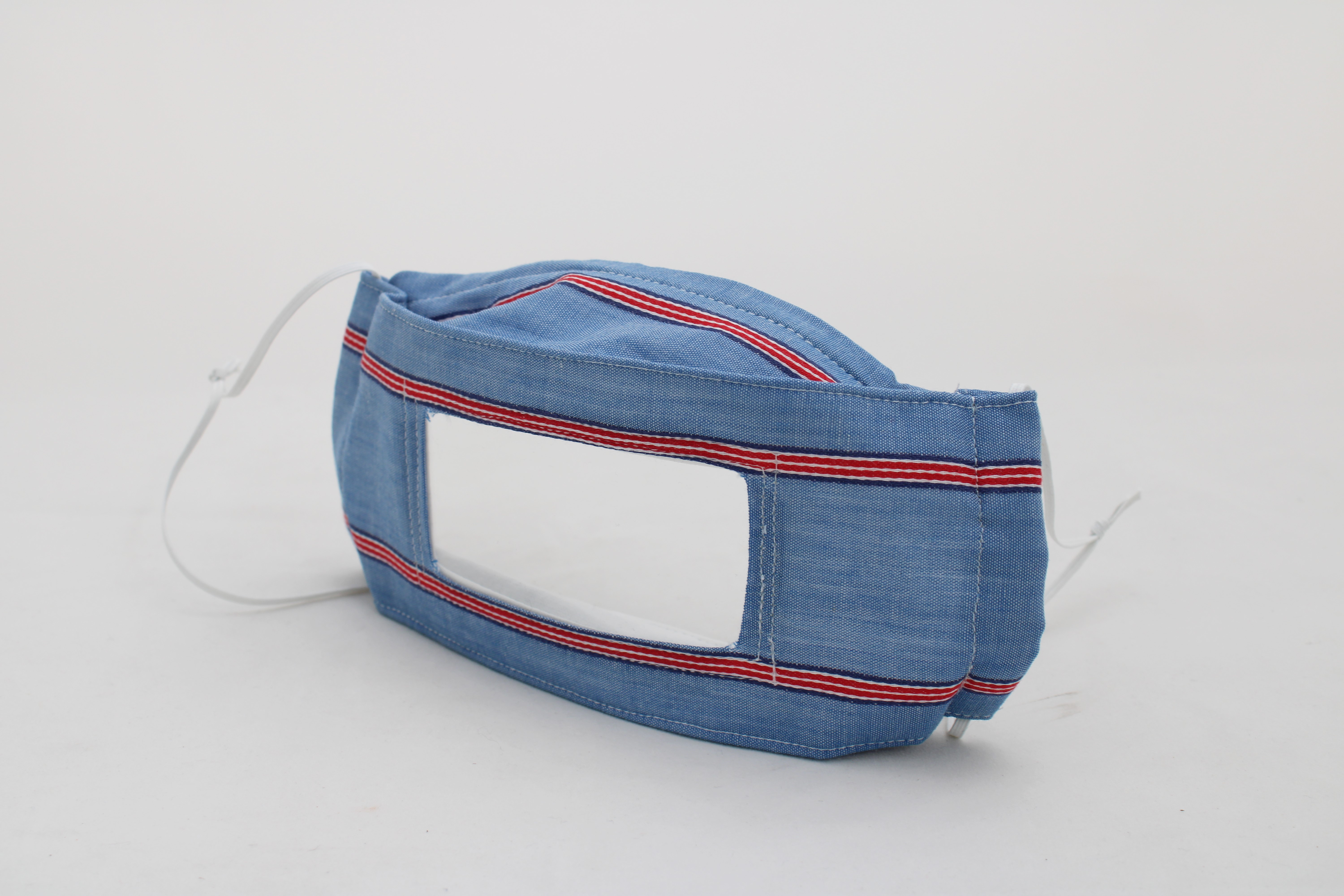 FIRST OFF THE MARK

The public health response from First Nations peoples, and First Nations health networks, has been a success story of the COVID-19 pandemic in Australia.

Aboriginal and Torres Strait Islander communities have been devastated by previous outbreaks of disease, including the Spanish flu, which is estimated to have killed 50% of people in some Aboriginal communities.

This time, well ahead of state government border restrictions, remote Indigenous communities in South Australia, Western Australia and the Northern Territory began restricting outside access and non-essential travel permits – way back in March. A task force, meeting remotely, and co-chaired by the Department of Health and the National Aboriginal Community Controlled Health Organisation was established in March, too.

The Northern Land Council, with the help of the Aboriginal Interpreter Service, started creating public health resources in Indigenous languages as early as February. In total they made videos in 18 Indigenous languages and recruited elders and cultural leaders to help spread the message.

The focus on First Peoples-led health initiatives and local leadership has worked. To date, there have only been 147 cases of COVID-19 notified in Aboriginal and Torres Strait Islander communities, which represents approximately 0.5% of all confirmed cases.

Many doctors, nurses and volunteers died during the Spanish flu outbreak in 1918-19. In 2020, telehealth services – especially patient consultations and clinical assessments via phone or video conference – have been key to keeping health professionals safe and slowing the spread of COVID-19 in clinics and hospitals.

Rapidly rolled out en masse during COVID-19, telehealth has enabled newborns to be been shown to parents, connected patients with their families, allowed healthcare professionals to deliver care independent of location, and in some heart-breaking situations, people have had to say goodbye to dying loved ones, with hospitals unable to accept visitors.

There’s little doubt that telehealth is here to stay in some form or other, and there’s no doubt it’s saved lives in 2020.

It’s striking how many parallels there are between the present era and the Spanish flu era. This time, though, the pandemic has coincided with a revolution in communications technology.

New technologies have enabled people to stay connected while physically distant in ways that were not possible 20 years ago and practically inconceivable 100 years ago.

Our struggles and successes in using new tools to manage the spread of the virus – and enable the spread of vital health information – reflect an era of rapid adaptation to technology that is advancing at a revolutionary pace.