Our working lives, and social lives, have moved online during COVID-19.

Instant messaging apps, video-conferencing services and social media platforms – from Whatsapp to Slack, HouseParty and TikTok – have become part of our lives like never before, with social-distancing measures keeping many of us away from our workmates and our friends.

All sorts of ingenious cultures and communities have emerged in these virtual spaces.  We’ve traded memes, shared resources, worked together, danced together, sung together – even taken our garbage out together.

We’ve found creative ways to bolster each other during isolation. And we’ve discovered, through Zoom, ways to make workplace meetings so much worse than we ever could have imagined.

But our increasing dependence on digital technologies has come with a growing sense of unease. We’re starting to feel the ‘digital divide’, where lack of access to communication technology is compounding social disadvantage. And more of us are starting to look more critically at the untrammelled power and obscure policies of Google, Facebook and other tech giants, too.

Music is a powerful uniting force, and often a huge source of comfort, during difficult times. The nature of the COVID-19 health crisis, however, has prevented us from making and enjoying music together in the usual ways. Bands and choirs have not been able to rehearse. In many parts of the country, concerts have been illegal.

The phenomenon of virtual choirs tells us a lot about the value we place in music – to convey messages of hope and to lift our spirits. Across Australia, and across the world, people have overcome extraordinary logistical, artistic and geographic obstacles in their determination to make, and share music, during this pandemic.

The Scrub Choir saw more than 200 staff from all across the hospital – including nurses, doctors, executives and admin, cleaning and security staff – performing stirring renditions of Count on Me by Bruno Mars and Stand by You by The Carpenters.

These videos conveyed a message of solidarity and reassurance to the community and honoured the efforts of the frontline workers responding to the pandemic. They boosted staff morale and – with their moving message of hope and solidarity and their 60,000 YouTube views – possibly induced many litres of Australian tears.

Kutcha Edwards, a Mutti Mutti man and singer-songwriter, had to shelve plans to record his song, We Sing, with a studio choir when COVID-19 hit. Instead, he assembled a 100-piece remote choir to share his anthem about freedom, justice and human connection virtually. Edwards is a member of the Stolen Generations and has devoted much of his career to singing about racial injustice and to sharing his culture.

Many of us have become stars of the small screen during the COVID-19 era, with video-conferencing platforms like Zoom, HouseParty and Facetime our new meeting places.

With so many of us working from home, we’ve seen a chaotic blurring of our family and professional lives. Children have crashed our work meetings. Pets have crashed kids’ home-school sessions.

Comedian Hamish Blake’s Instagram video series, Zoom for One More, took the chaos to another level. The series saw him sneaking into the private Zoom meetings of businesses, sporting clubs and school classes – and surprising people online.

The series injected some fun into a platform that had started as a novelty and, in just a few months, became a mundane, or even a dreaded, part of everyday life.

WATCHING YOU, WATCHING ME

Blake’s series was possible only because of a security loophole in the Zoom platform, allowing users to share meeting links and passwords indiscriminately. In one episode of the series, he intruded on an Air Force meeting, raising fears that Zoom’s privacy vulnerabilities could have serious international security implications. The Australian Defence Force banned the use of Zoom and other Australian companies followed suit.

Many of the tools and technologies we’ve used to stay connected during this period of isolation – either by choice or necessity – are less than 20 years old. But they’ve become so interwoven with our lives that they have sometimes felt intrusive, oppressive and even manipulative. More of us are starting to ask: What are the big tech companies doing with our data? What information are they showing us and what are they hiding?

In the US this year, Mark Zuckerberg of Facebook, Jeff Bezos of Amazon, Tim Cook of Apple and Sundar Pichai of Alphabet, have faced questions in congressional hearings about market dominance, predatory practices, misinformation, online hate speech, surveillance and more. In August, President Donald Trump moved to ban the popular Chinese-owned video-sharing app TikTok, amid fears that TikTok could be forced to share data about users with the Chinese Government.

There have been fears of a TikTok ban in Australia, too, where the app is hugely popular, especially among teenagers. In August and September, executives from TikTok, Facebook, Twitter and Google, were asked to appear at a federal Senate inquiry into foreign interference conducted through social media.

Debates about the tech giants and questions of free speech, misinformation, bias and surveillance have gained momentum in Australia this year, as elsewhere, with the potential to change the digital landscape forever.

PORTRAITS OF A COMMUNITY IN LOCKDOWN

The COVID-19 health crisis is a collective experience but it has impacted us all very differently. Life hasn’t stopped during the pandemic. Babies have been born; people have died; people have lost their jobs or quit their jobs; people have married and split up. We’ve tried to navigate and share these milestones – often awkwardly, through our phones and computers – as best as we can.

Photographer Kristyna Hess has been documenting the lockdown experiences of her local community in Kingsville, Melbourne, with a series called Lockdown Portraits. Together, these animated portraits capture a range of experiences and responses to the crisis.

Confined to our houses, and living through our screens, we have found many inventive ways to express our frustrations. Isolation has spawned some wildly popular memes in Australia – with #iso and #lockdown images and videos relentlessly produced, remixed and circulated online. They’ve jumped between users, between platforms and sometimes into the real world and then back online again.  This material is part of our cultural heritage, giving rich and often hilarious insights into our shared experience.

Some of these memes will age terribly and others have already disappeared into the vast internet abyss. But some might stand the test of time, or at least provide some clues to people in the future about what delighted, preoccupied and amused us during this strange moment in history.

As the prospect of lockdowns and shop closures loomed across Australia in March, people started panic-buying and stockpiling at supermarkets. Shortages of toilet paper were reported all across the country and #toiletpapergate, #toiletpapercrisis and #bogroll started trending online.

Get on the Beers

Who could have predicted that there would come a day when people in Perth danced in nightclubs to remixes of Victorian Government press conferences?

The ‘Get on the beers’ meme began at the March 22 Victorian Government press briefing, when Premier Daniel Andrews announced the temporary closure of pubs and restaurants. Andrews warned Victorians against social gatherings at home, too. Pubs are closed, he said, and it’s not appropriate ‘to have your mates around to [your] home and get on the beers’, either.

Something about this phrase – ‘get on the beers’ – struck a chord with the public and became a refrain, and a fixture, of social media during Melbourne’s lockdowns, spawning a Facebook group, countless gifs and graphics and a viral video remix, which hit the Top 20 on the Australian music charts.

At Daniel Andrews’s October 26 press conference, the ‘get on the beers’ meme looped back to its source.

The Victorian Premier had given, by this stage, 115 consecutive daily press briefings, keeping Victorians updated through the second wave of the virus and the second lockdown. On October 26, with case numbers finally under control, Andrews was able to announce the reopening of hospitality venues.

A reporter asked, ‘Can I confirm you are saying we can finally get on the beers?’

‘I don’t know that I’ll be drinking a beer tonight,’ Andrews said. ‘I might go a little higher up the shelf.’ 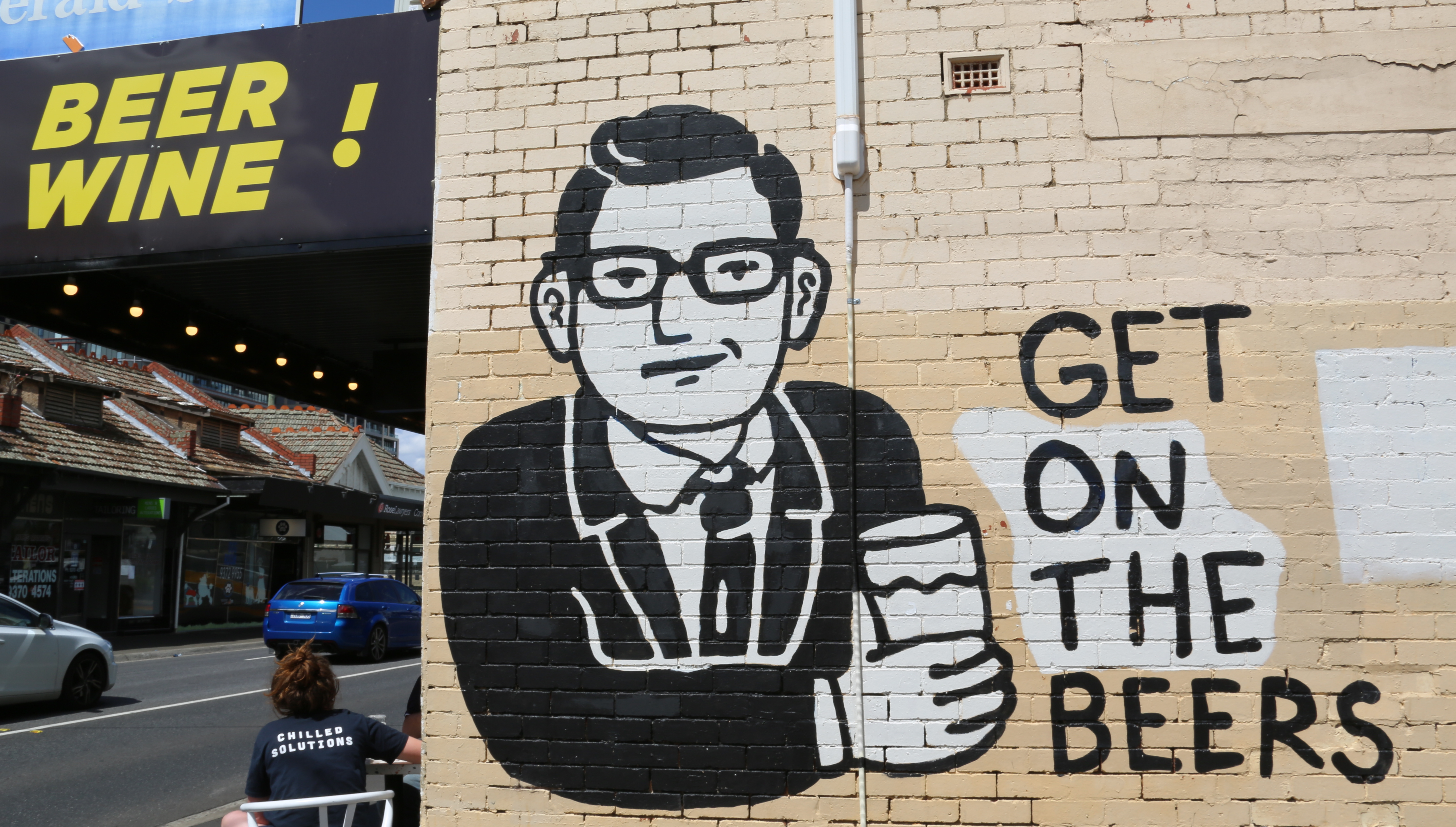 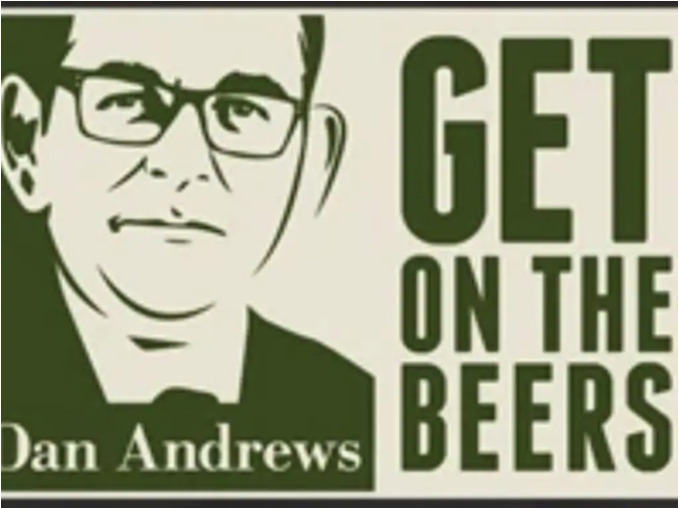 As the days dragged on and tedium set in, many COVID-19 memes found humour in our increasingly desperate lockdown coping mechanisms. ‘Stage of quarantine’ memes have been popular in many parts of the world. In Australia, a version featuring pop-culture icon Kath Day-Knight from the TV show Kath and Kim was shared widely.

A post shared by Every Outfit on Kath & Kim (@everyoutfitonkathandkim)

Meme, Every Outfit on Kath and Kim, 2020. Image courtesy of @everyoutfitonkathandkim on Instagram.

Mundane activities have morphed into strangely meaningful rituals while we’ve been living in isolation.

Back in April, Danielle Askew from Hervey Bay in Queensland, joked to a friend that taking out her rubbish bins had become the highlight of her week – a chance to get some fresh air, see her neighbours and mark the passing of time. She began sporting costumes for the weekly occasion and posting photos to social media.

This quickly turned into a viral craze that spread across Australia and then around the world. Askew’s Facebook group, called Bin Isolation Outing, has more than one million followers.

It’s a buzzing online community – a place of camaraderie, healthy competition and increasingly elaborate outfits. Even during extraordinary times, some things stay the same: our sense of humour and the presence of garbage. 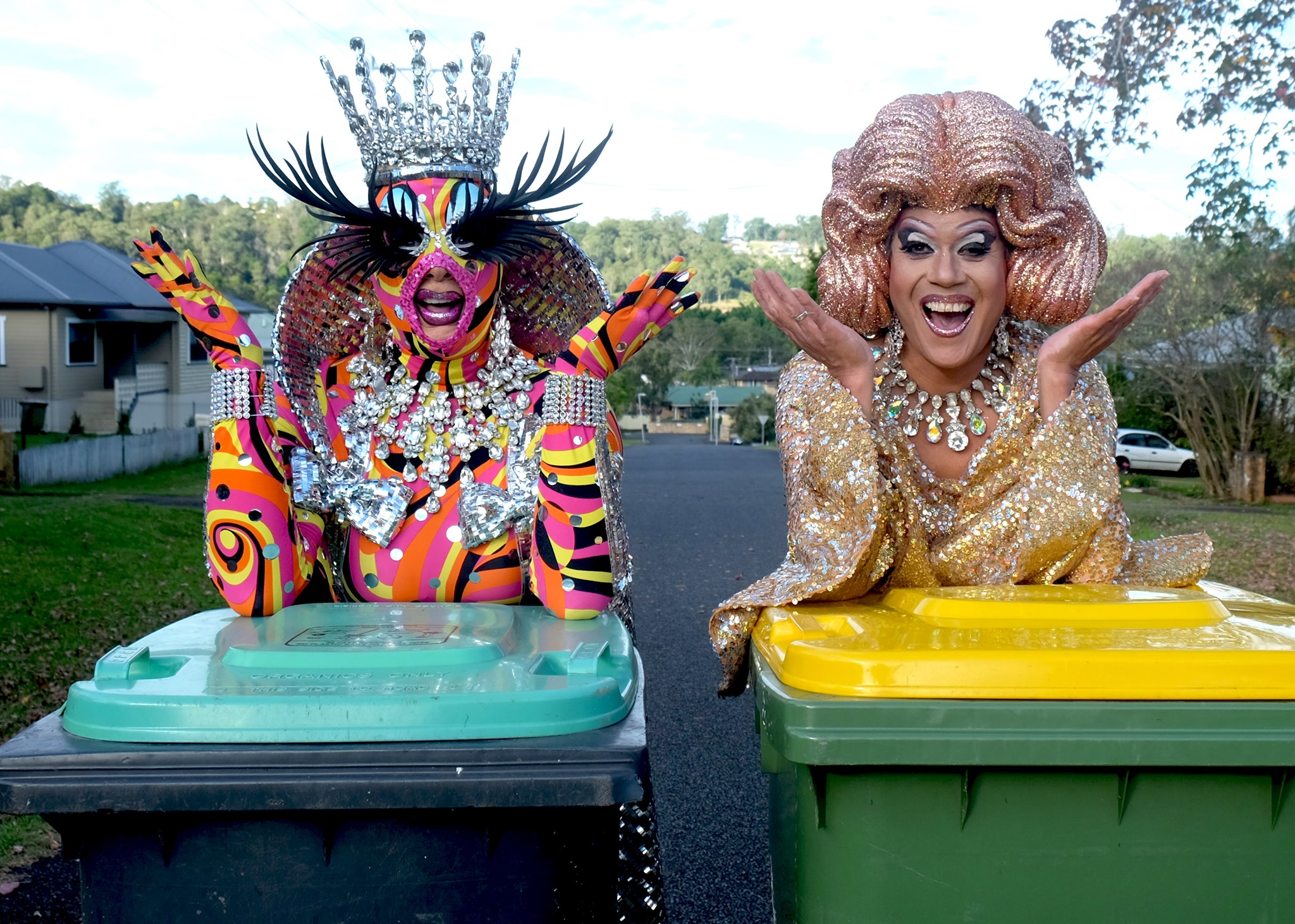 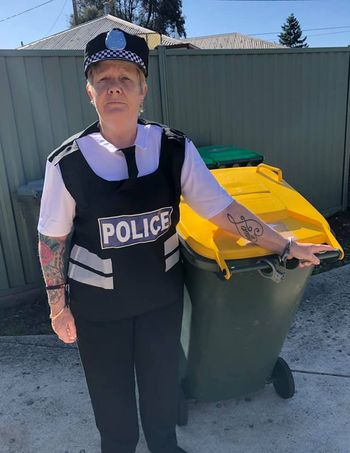 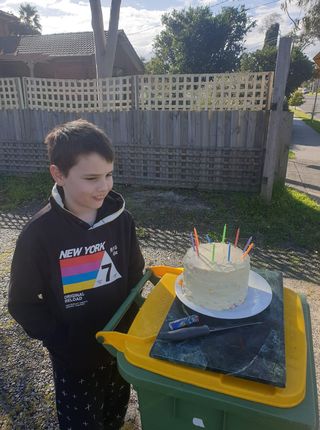 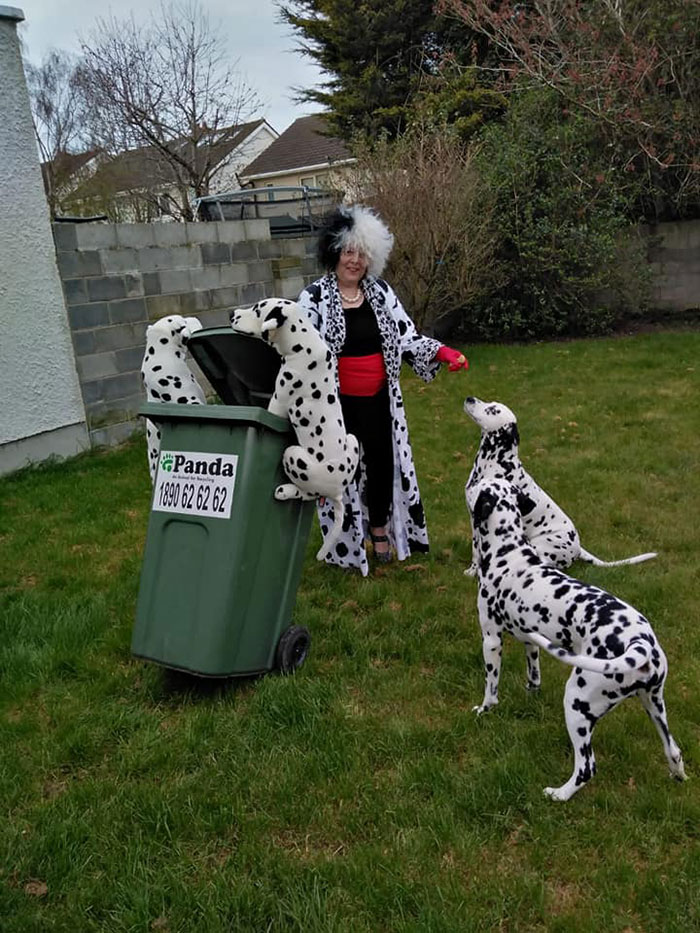 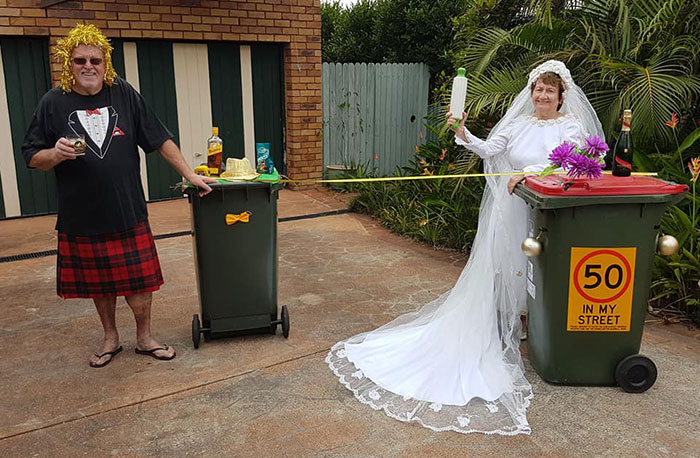 Feelings of suffocation and captivity have been widespread throughout this pandemic. As our physical and virtual worlds have blurred this year, many of us have felt that we can’t escape our homes and we can’t escape the internet. As 2020 draws to a close and we emerge from lockdown in our homes, we may have gained a fresh perspective on the internet’s overwhelming possibilities; an enhanced sense of online community and a greater appetite for scrutiny.

With special thanks to our collaborators: